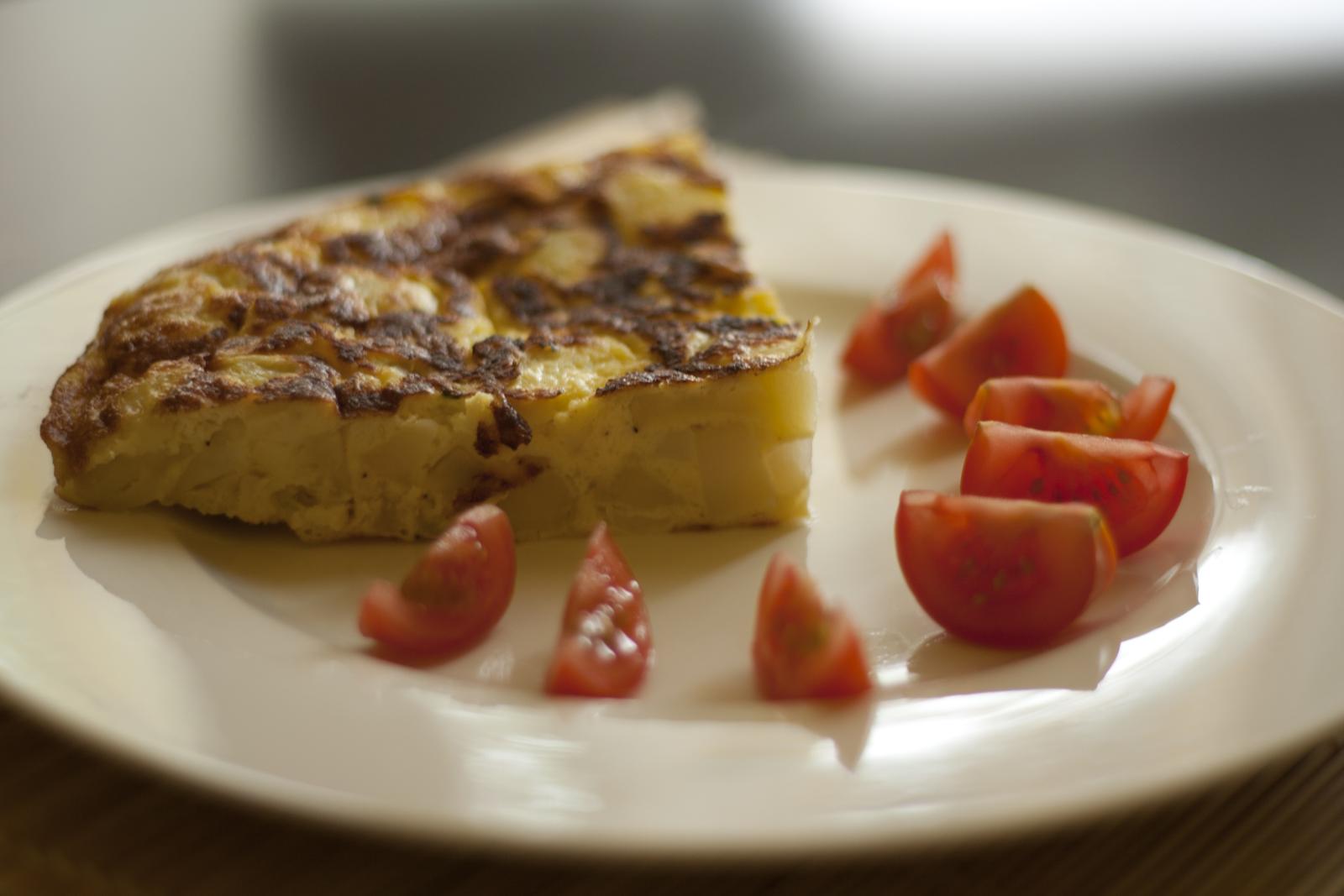 How to make a Spanish Omelette (aka Tortilla Española)

Simple, or complex, this is a dish that is loved and enjoyed by millions.  And, this is the dish that convinced my children to eat spinach. I am sure those with children can appreciate that!  They still don’t eat spinach in all the ways I enjoy it, but they have expanded their horizons, and I’m happy with that. BUT!!!!  Beware…that the “traditional” Tortilla Española has no spinach.  I am sure there are some people that read the first two sentences and immediately clicked away saying “there’s no spinach in a Spanish Omelette!!!”

I used to eat this dish often when visiting my Spanish grandmother.  Sometimes it would be served hot, sometimes cold, but it was always a treat because of who was serving it to me. I have incredibly fond memories of my Grandma and her trying to speak English to me. “Do you want coffee? Do you want tea?  When are you going to learn Spanish or French so we can communicate better?”

Ok, the last sentence was never said out loud, but I always imagined it. At the risk of sounding nostalgic, I really miss the incredibly sweet, elegant grandmother, who spoke Spanish and French, but no English. We got by well enough though.

The supposedly “traditional” Spanish omelette is nothing more than potatoes, eggs, and onion. However, I like to add lots of different things depending on the mood, especially spinach.

I also add cheese, because cheese is delicious, right?  Any kind will work.  I tend to stick with cheeses like swiss, gruyere, and mozzarella, but cheddar sometimes makes it in there too.

Other ingredients that are tasty: Ham, Bacon, Bell Pepper.  Really… the choice is yours.

Some of my favorite combos:

Experiment! You can hardly go wrong.

This is a recipe that can be made ahead, refrigerated, then served hot or cold later on.

Wash potatoes and slice thinly (about 1/4 in or 1/2 centimeter thick). Slice or dice the onion as well.  Thickness depends on personal preference.

Hint: If you want to speed up the cooking process, microwave the potatoes for two to three minutes before slicing but not enough that they are cooked and break when trying to slice.

Heat olive oil in a nonstick pan and add sliced potatoes. Cover and cook, stirring gently every few minutes, and try not to break up the potatoes. Covering the pan help the potatoes cook faster, but is not required.  Traditionally, you would cook until the potatoes were just done, but I like to crisp the outsides for a bit more texture.

When the potatoes are nearly complete, add the onion and any other vegetables you have prepared. Cook until the onions are soft and translucent. Again, if you prefer, you can brown the onions a bit. I like it both ways.

Mix the eggs in a bowl with the salt.

Add the eggs to the potato onion mixture, and stir gently to make sure everything is well mixed and cook on low (covered if possible) until the bottom is set but the top/middle is still not solid.

Ideally, at this point, you have another nonstick pan of the same size that you can place on top and flip to continue cooking until complete.  This is the least messy manner. I do not have a pan of the same size anymore, so I use one of two methods. You can hand flip it if you are a super chef, but if you miss in the slightest, you will have egg everywhere.

Method 1: Gently slide the omelette onto a pizza pan or baking sheet, then put the original pan upside down over the omelette, and using both hands, flip and continue cooking.

Method 2: Place an inverted plate over the pan, and flip onto the plate, then slide the omelette back into the pan. If you do it this way, you will have runny egg on the plate.  Just lift the omelette and pour the egg in the pan.

Cook until set. This again is a personal preference.  Some like the middle still runny, others like it fully set.

If you add any of these, I recommend you cook them first and add to the egg mixture before adding to the pan.

Fresh Herbs - do not cook these, just add to the eggs before adding to the pan