What to do on Monday night in Buenos Aires

Monday night in Buenos Aires can be kind of slow.  Most nightclubs are closed, and the bars have far fewer people.  One great option is to head to the Konex Cultural Center in Palermo (almost Abasto?)

Every Monday night at Konex, you will find “La Bomba de Tiempo” starting promptly at 7pm.  The name means “Time Bomb”, and for some very strange unknown reason, every time I hear it, I get “Let’s do the time warp again!” stuck in my head along with mental images of…  Nevermind! I chalk it down to my very misguided and wasted youth. 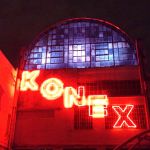 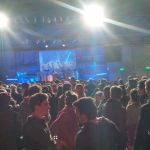 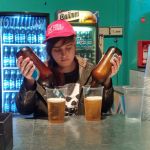 To start, the group is large, with about 17 people, and with lots of different percussion instruments.  It reminded me a bit of the Blue Man Group except the music is a mix of African, Caribbean, and South American beats.  Another interesting difference is that each week, they invite another musician or band to play with them.  The first time I went, it was a guitarist (sorry, can’t remember the name), and the second time was with an Argentine heavy metal band.  It’s kind of musical improv.  It was REALLY cool and sounded great!

Here’s how the night went down:

Outside in line, the people waiting were busy chatting/flirting, drinking beers/eating empanadas sold by the various street vendors, and smoking weed.

There are also a lot of people that work for the local bars passing out coupons for free beer or pizza after the show; the show ends at 10pm and nobody in Argentina goes to bed at 10pm, even on a Monday, so… “come get some free pizza!”

Once inside, the show started (surprisingly) on time with an opening band.  They didn’t play too long, and I wasn’t a big fan, but right after, La Bomba de Tiempo got started.

I wasn’t sure what to expect, but was more than pleasantly surprised!  La Bomba de Tiempo played by themselves for the first hour or so, and the music was great!  The crowd was dancing, swaying, or jumping, depending on the song (and depending on how much they had drunk or smoked).

Speaking of indulging, they sell beer by the liter inside for about $4-5 USD per beer.  They have other drinks as well, and you might get a contact high just being there though people seem to like to share whatever they have as well.

Eventually, La Bomba de Tiempo will be joined by the guest musicians.  Generally, the music that is performed is an interesting mix of the two different styles.  Both times I went it was good music and also very interesting.  I never thought Heavy Metal and Salsa beats would go together, but they did!

The show ends promptly at 10pm and the crowd heads down the streets in various directions chanting and playing drums.  A few will go home, some will go try the free pizza or beer, but most will continue to party for at least a couple more hours.

WARNING!  If you follow the party like we did, be very aware of your personal belongings.  A guy tried to get my wallet, and I noticed several other thieves working the crowd.  These guys know that most of the people coming out of Konex are drunk, high, or both.

If you have the chance, go!  It is a great experience!

There are a few other things you can do on a Monday night in Buenos Aires, but I would put this at the top of your list.

What other great things do you know about to do on a Monday night in Buenos Aires?